Do you know what is GOP?   If one searches for the acronym directly in Wikipedia and your computer is set up in English, then probably the delivered hit is: “The Republican Party, commonly referred to as the GOP (abbreviation for Grand Old Party).” However, this post do not make reference to that GOP……“  No. I do not refer to that GOP.

To make my question clear is: Do you know what is GOP in Germany?  Now there are different options in Wikipedia, and the one I am referring to is the acronym of Georgspalast, which today is a music hall – theater.

Originally the Georgspalast opened in Hanover, at the beginning of the 20’s. It was a “Café-Restaurant Georgspalast“  where concerts with orchestras were offered and people could go to dance. Due to the second wold war, the GOP was closed on Oct 9, 1943. It reopen its doors on May 27, 1948 as a Varieté-Theather (that is music hall – theater) and it was quite successful in Hanover.

In 1962, the GOP closed its doors again because it was difficult to compete with “new” ways of entertainment such as TV.  (side note: this sounds to me familiar).  It was not until 30 years later, in 1992,  when the GOP Varieté-Theater opened its doors again focusing on family entertainment and changing constantly its spectacles. In 1996, GOP started to expand in other parts of Germany. In Munich opened its doors in 2008. The building selected to be the GOP of Munich has also its history. It was the “Kleinen Komödie”, which was already a theater with tradition in Munich since 1946.

The show was homelike. It was professionally done and at the same time, it gave me a feeling to be a “home” circus. The artists were multi-talented and one could see the diverse roles they had on the play. For example: one can be an acrobat for a moment, then could act a bit, and follow to be a  musician and later to help another of his colleges. It was nice to look at. This versatility made me feel the circus close and natural. It was nice! :).

Perhaps my feelings towards “La Luna” were also influenced by what I watched some days earlier on TV. The only program I watched was a function of THE amazing show of Cirque du Soleil O . What a production of “O” !!!  It is just amazing !!! A circus with high technology involved.

“La Luna” has a good group of artists / acrobats and it is enjoyable to look at them. It does not have all that high tech, and it does not need it.  One of the artists made me smile more often than the others, and she triggered my admiration, her name was Amelie Demay. She was so expressive and fun. Additionally, she seemed quite strong. Unquestionably, she has a well exercised and muscular body. No idea how old she is, but definitely she did not look the youngest member of the cast. This trigger my admiration even more when I saw her routines.

Once back home, I researched something briefly about her. The oldest article I found was from 1987 an interview in LA when Demay was 19 years old. Apparently, since young she has been strong, as the photos in getty_images illustrate.

Additionally, I found her name on the book: “Fall of the BIG TOP the vanishing American Circus” by David Lewis Hammarstrom. Those two brief readings, withing a proper research, but it made me realized that she is one of the first group of artists that worked at the Cirque Du Soleil. Interesting !!!  I even found the following video of her performace back in the days.

In La Luna, Demay performs with her family.  So, no wonder my feelings! everything adds up 🙂

Wasn’t it a special evening?  I was in a historical place, enjoying a good spectacle with professionals in the art in a family environment. Of course my company was also very special, in particular the young lady that was siting next to me. 🙂

Thank you for the special evening!

My first discovery from 2018 was on a familiar path. That is proof that someone one walks without looking or paying attention where one is walking.  We were heading towards Olympia Park, through a familiar path, and I asked to D40Oom what was that: 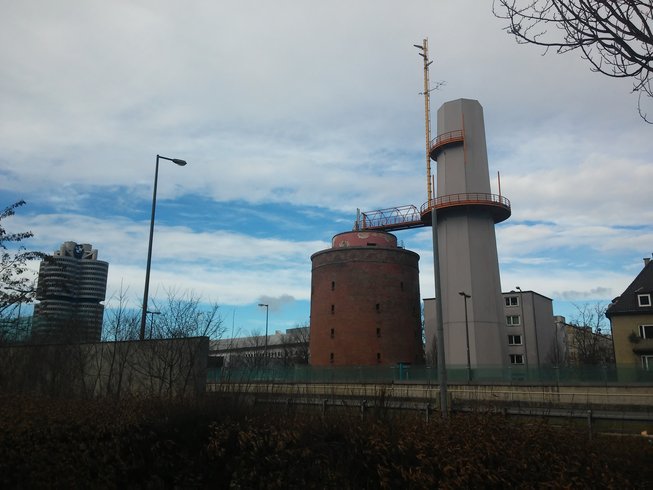 What is the red building?

I have never paid attention to that round building before, so I was curious to know what is it.
The answer: It is a Hochbunker

Ooooooooh! A new thing for me.

I only have done a fast search on wikipedia about what is a “hochbunker”.  In English I only found hochbunker mention within the page of  “air raid shelter”. The first paragraph of the section related to hochbunker reads:

Hochbunker(s), or “high-rise” bunkers or (blockhouses), were a peculiarly German type of construction, designed to relieve the pressure German authorities were facing to accommodate additional numbers of the population in high-density housing areas, as well as pedestrians on the streets during air raids. In contrast to other shelters, these buildings were considered completely bomb-proof. They also had the advantage of being built upward, which was much cheaper than downward excavation. There were no equivalents of hochbunkers in the cities of the Allied countries.

Also I found a list of hochbunkers in Munich. The particular one on the photo is the one on:

So, the new word and new concept that I learn today it was hidden in plain sight.

The book has a series of categories relevant to understand how the Berliners lived across time, before the war until its end. The categories include food (rationing food, clothing, interaction with other immigrants, discipline, fears, propaganda, weather). For me, it is the first book I read which focus mainly on “ordinary” German citizens, instead of the Nazis or the Jewish.  The information and research done for writing the book is vast and well documented. If one wants to gain more insight of a specific topic is possible to search for it on other sources.

The author helps the reader to understand and to focus on one specific category per chapter – e.g. food – simultaneously one is connected to the wider historical context. The process allows the reader to immerse in the scenes and descriptions of the book, reflect on them, and at the same time one is not lost in them.

I did not want to stop reading the book, I enjoyed it and at the same time was an eye opener. Earlier, I read the amazon’s reviewers and someone mentioned that there were other similar books before this one, so this book was not adding nothing new. Perhaps the comment of the reviewer is true, and it will be interesting to read the other books. However, as someone that picked the book randomly from a bookshelf at the airport, because the title and topic called my attention, I am very pleased that I bought it and I feel I learned from it.

In this week, my main activity was writing, writing…. more writing. Afterward a little bit of reading to be able to think then I can continue  writing.

Also I prepared myself, some how, for the very busy following weeks.

My outstanding activity on this week was: I bake a delicious cake for a birthday party. I rarely bake cakes since I am in Finland. I mainly “survive” in the kitchen. In addition, an important event of this week was that my dad made it to his birthday 🙂

Hence, this week reminded me that even that I am passionate with what I do, there are other very important things that I also love to do which I have to find time for. To have a balance life. I need to play more !!!. Regarding a balance life, the best talk related to it is from Doris Kearns Goodwin on learning from past presidents please enjoy it: