I really enjoy playing.  A Game, for me, is more than a game system. Each game, in my perspective, includes many contextual aspects which can be summarize in the following dimensions:  environmental, socio-cultural and personal (see my dissertation for more) .  However, relax, I am not writing an academic reflection here. This post is about games I am playing with my family during this confinement. 😉

Before I start describing the games we have played so far,  let me specify our constrains:  We are 4 players in 3 households. We are distributed as follows:

Our communication set up is: we have a group in whatsapp, and through a video-call at an agreed time the game session starts. 😉

Before  covid-19, each one of these players have their own group of friends to play and we gather only to talk. However, during this confinement, we want to play together and laugh a bit together.  [side note:  I am a lucky person, because my family like to play games 😉 and many of us have the same games at home 😉  facilitating things] .  We do not want to be play games which are only digital for the following reasons:

We look for games that allow us to feel confident to play together, and we can fix individually if something doesn’t work. So far we have played the following 5 games, which I am presenting here.

My niece proposed the first game in this “confinement” series:  “La Loteria Mexicana”. All the players of this group know how to play it, and all of us have the game. Then it has been easy to play it and works excellent. Below is a video explaining the game.

If you do not have a “loteria mexicana” I assume playing bingo might work as well. 😉

If you know how to play it and one of the players have the cards, then you only have do download the board from internet. There are many board available online.

We play la loteria mexicana in confinement as follows: one of us “sings” the loteria, while the other players fill the boards. It plays exactly as if we were physically together.

This is a common game we played as children in Mexico in the 80s. Maybe earlier, I have no idea about this.  The following video explains how to play the game in English:

As with the loteria mexicana (previous game), this game plays exactly as if we were in the same room. One player starts to go through the alphabet silently, while a another player indicates when this player should  stop.  Next, the player who was stopped let us know in which letter was the last one he thought. With this letter, all player start writing words, that begin with this letter in different categories which have been predefined.  In our group of players, we are using the following categories:

It has been fun, and we are LEARNING words constantly! 🙂   Note: it is not valid to look words up in internet.

Another game we have played and it works very well is  Heckmeck.

In our case 2 household have this game physically. For the third household, the player made her own  “domino” pieces in paper as we indicate which pieces are needed. The game is played with 6 dices, which have a worm instead of a number 6. Hence, the player without the original game uses 6 normal dices and the number 6 is the worm.

As the game is played by turns, each one of us follow the game at home.  Also one of us broadcast in her turn the general board to keep everybody in tune.

NOTE:  it is appreciated when in one’s turn we rotate the camera of the phone to see the result of throwing the dices. We trust the player, it also makes you feel more “present” when you see the result of the action.  Hence to have a smartphone where one can easily switch the front and back camera comes handy in here. 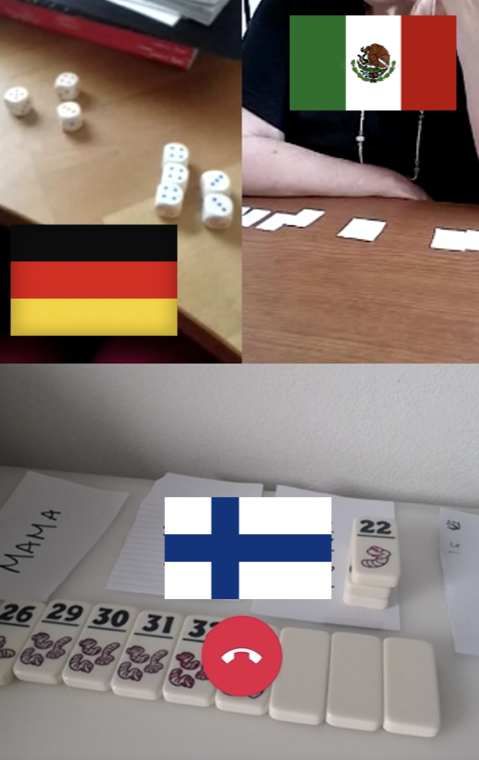 A screenshot of our game. Below showing the current situation, after the German playing is finalizing her turn.  Mexican playing observing the situation

This game also works well. All of us know how to play it, and we have the same “list”. Each time is our turn, we try to “turn” the camera of the phone, so the others also see what the player have through.

It is the latest we have played. The 3 households have the dices making possible to play this game.  😉

Screenshot of our game play. In this case, Finland was starting the game while Germany was switching her camera back to the players, but i do not have permission to show the face of the players, so we keep it in this way 😉

Based on this experience, I assume that:

Also I am discovering the need to design games for players who are located in different locations, and want to play together the same game at the same time without being this a video game. Will be this a new type of games? something I need to reflect further.

I will keep reporting about what games are we exploring in this configuration, and maybe even we will even design new games.

If you have any idea of games we should try, in this setup, please do not hesitate to let us know! We are open to explore more games! 🙂

Keep healthy and we keep posted!