Since we moved to Turku we try to get involved with the game community. That involves developers and players.  There are different types of activities going on with the game community in here.  Frankly talking, from the possibilities we are aware of we had been more consistent with the monthly gathering of the  Turku Board Games Meetup.

So, be in the game board day was nothing new. However, I discovered two new games.

It is an interesting game. The main goal is to achieve that your robot visit “X” number of specific spots in order. Each round we program the game. However unexpected situation can happen with other players or if we did not get the proper “cards” to program the game or if we forget that we are in the moving “band”, or if we do not calculate well.

Honestly I enjoy the game and surprisingly I won this first time I played. I feel honored because I know, at least one person on this round is a very good programmer. Thus, there are hopes on my programming thinking! 🙂 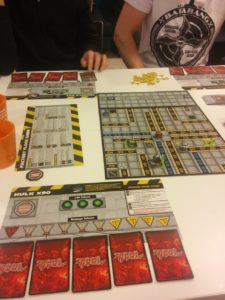 As the robo rally, I confess that I like this game. I am not good on games of bluff. Also I dislike the competitive games where one has to “harm” or “attack” the other players.

In la cosa nostra the player has to attack others players and maybe needs some bluffing, however it does not feel wrong. It is actually really fun. One of its appealing is that the game, I attempt to say, involves strategy. Also chance is well balance here. All in all a very good game.

It took us a while to play this game in this evening, because 3 out of 4 of the  players (that includes me) were first timers for this game. Only one of us have played once before. And the game is strongly based on what the cards say.  So, it is beneficial to know the cards to build a good strategy.

For me this was a long day of activities, so by the 4th round of the game I was exhausted. Consequently I did several several poor decisions for my gangsters and, as you can imagine,  I lose the game. Nevertheless, I can say: I would like to play again! 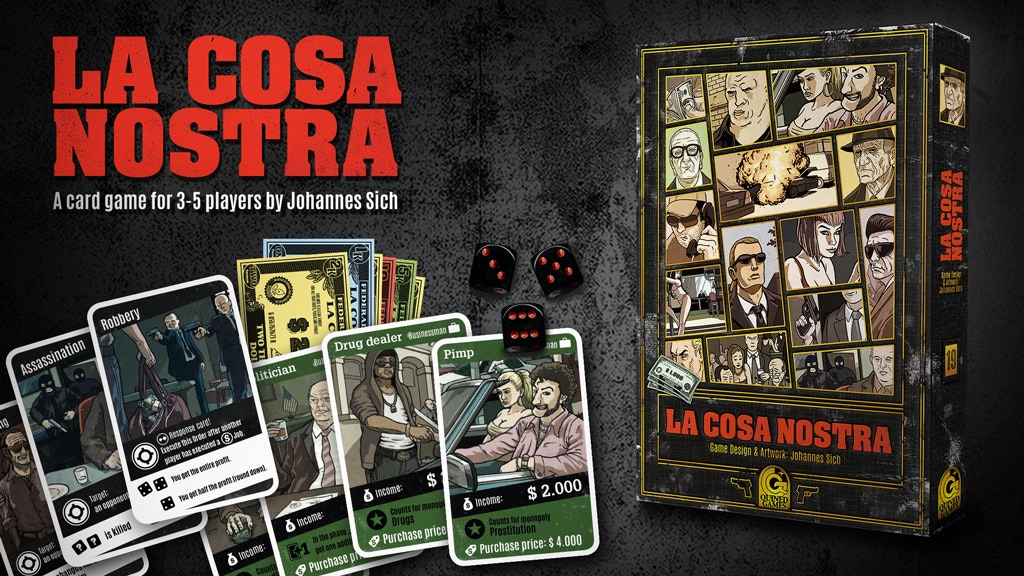 Both of the game I discovered today are wroth to try them. I highly recommend them. Additionally, to those two, we also played Splendor (for the records, I also won the round, lucky me this evening). It was a very good game evening!

Side note: while looking for the the photos of the game, I discovered that “La Cosa Nostra” actually it was a really Sicilian Mafia…. wow! need to read more 🙂

See you in February!

Since long my internal voice tells me: write in your blog about the games you play.

Ok, the idea is cool! Specially because the games one plays as the books one reads and the people one interacts with are part of one’s experience. All sums up!

However in order to write about games the follow up question is: how or what shall I write about games? There are plenty of games reviews out there, from commercial and academic perspective.  In addition, from my personal viewpoint:

As this is MY BLOG, and I decided it is my virtual reference point, what I want is actually a digital memory of bits and pieces of my game experience 🙂

Hence, the first game I want to write about is rüsselbande. I played this game this year in late October with my niece and sister. I had a good time and right now I want to play it again.

What I find fantastic of rüsselbande’s game mechanics is: it is fun for a four years old as it is for a 45 years old. Good design Alex Randolph!

Here some photos to make you craving to play it as well!

the pig race is tight

a free ride for three of us

blue is getting behind

the end is very tight!

actually the blue, which was me, did it ok at the end! 🙂   Looking forward to play this game again 🙂

Yesterday I played Run un den Kalendar. We were 2 adults and one 4 years old.  In theory this game helps the children to learn the days of the week, the months and the four seasons.  I have my doubts if the game helps the children to learn about the days of the week and the months.  However in reference of the four seasons the game is well done, in my opinion.

The game mechanics involve some elements of chance and strategy. For example, depending which number one gets after spinning a wheel, one can move either right or left to the corresponding spot on the board. Then, the player takes the card and describes the picture connect to a season that is in that specific spot. The cards are placed randomly, so one has to pay attention. The game’s aim is to get a card of each season. So, the player has to think carefully which direction to take, to actually collect at cards of the four seasons. 😉

The game also pays special attention to fine motor skills, at least in one “mini-game”. Let me explain. The spinning wheel can indicate the number the player has to move in the board, or if the player has to play a mini-game which allows to get a seasonal card without moving the tile from the board. Ideally this card is from the season the player is missing.  The mini-game is about dropping a bar, which has all the seasons, between a player’s fingers. The player has to close her or his hand fast when the bar is passing by. Ideally  the player stops the bar in the season s/he needs. It is a fast mini-game within the game, where the children have to learn to practice their coordination skills  when dropping the bar and also to close their hands fast.

Designing games for small children is challenging. It increases the difficulty level when we aim to design games for a family with small children.  The constant question is:  how can  we design a game interesting for the small ones as well as for the adults?  mmmm…  interesting challenge to solve!  And you have to notice that I even didn’t even mention in my question the game’s learning aspect, because that increases the challenge. 🙂

If  I have to rate this game, I think I will put it 2 of 3 stars.   I confess, I have an enjoyable game experience of describing the seasons with the little one 🙂